Posted at 11:01h in Insects and Humans by entoblog
1 Like 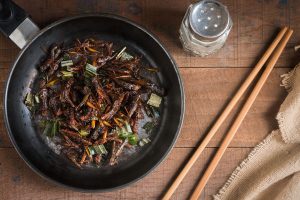 Chapulines are a superior snack from an health and environmental perspective when compared to many fattening, calorie-dense, and nutrient-lacking snacks widely consumed today in first-world countries.

Grasshoppers are good for us. They are high in protein, low in fat, a prebiotic fiber and are full of very bio-available vitamins and minerals.

In Mexico, they have additional environmental and economic advantages. Capturing grasshoppers offers an ideal means of pest control.  This pest control isn’t only inexpensive but it’s profitable and helps reduce the use of pesticides and insecticides. A study in 2008 published in ScienceDirect titled “Harvesting grasshoppers Sphenarium purpurascens in Mexico for human consumption: A comparison with insecticidal control for managing pest outbreaks” suggested insect collection and consumption be employed as a viable means of pest reduction in various areas.  The authors reason the primary advantages are: “(1) a second profitable product for the human community; (2) savings realized from reduced cost of insecticides; and (3) reduced risk of soil and water contamination by insecticides.” (Cerritos and Cano-Santana, 2008).  These researchers also found chapulines sales net an average of 3,000 US dollars annually for Mexican families selling the insects.

Another study, Flores et al., (2014) suggested collection of the species S. purpurascens in Mexico, based on its biomass, had the potential to produce a gross income of 378 million US dollars and also found several advantages to mechanical collection of S. purpurascens over chemical treatment: “Promoting a change from chemical to mechanical control methods of pest species could greatly impact on the health of millions of people globally and on the environment, reducing carbon dioxide and methane emissions, land clearing and the use of pesticides while obtaining economic profit.” The authors conclude: “Based on the biomass of S. purpurascens that could be generated in one year in Mexico, it can be assumed that insects are excellent candidates to form part of the diet of any human population.” (Flores et al., 2014).

Researchers in Premalatha et al., (2011) write: “The supreme irony is that all over the world monies worth billions of rupees,” that’s tens of billions of US dollars,  are spent every year to save crops that contain no more than 14% of plant protein by killing another food source (insects) that may contain up to 75% of high quality animal protein.”  (Premalatha et al., 2011).

They’re not incorrect. According to the Environmental Protection Agency report in 2017, in 2012 26% of pesticides purchased were insecticides, and 56 billion US dollars were spent on pesticides in total.  $14.5 billion was spent on insecticides. Manual control cannot fully replace insecticide usage, however, it may reduce necessary spending costs, and where pest control once cost a farmer, combatting some pests can be profitable.

Reduction in insecticide usage, particularly in areas of Mexico, is hugely important for the health of local farmers. A study in 1990 on behalf of the Global Health Observatory estimated worldwide up to 25 million workers involved in farming suffer from pesticide poisoning to various degrees.  While first-world nations have policies in place to prevent pesticide exposure, developing nations often lack strict regulation. Arcury et al., (2015) reviewed pesticide poisoning in Mexican farm workers of a specific community and concluded: “Occupational safety policy needs to consider these patterns of lifetime exposure when setting standards.” with regards to Mexican policy.

Insecticides are dangerous to human health and to the environment.  By comparison, hand collection of pest insects is effective, safe, and profitable.  Local communities benefit greatly economically from the purchasing of their chapulines, but are also more healthy for it.  Additionally, Chapulines as a snack food are more ethical. You’re purchasing product which originated from family farms as opposed to multi-billion dollar junk food companies. Plus, who doesn’t like lemon, garlic and salt?  Yum!