02 Aug Why Do Scorpions Glow?

Posted at 10:49h in About Insects, Featured, Insects and Humans by entoblog
0 Likes 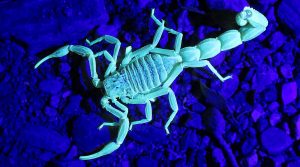 It’s long been observed scorpions are fluorescent under ultraviolet light.  This is most observable under black lights, however, scorpions glow dimly under the moonlight as well.  The fluorescence is a result of a chemical reaction which occurs in the hyaline layer of the scorpion’s outermost layer of exoskeleton; the cuticle.  Although it degrades from overexposure to UV light, it can remain largely intact long after the scorpion’s death. So long after that even some fossil scorpions are fluorescent under UV light.

The precise cause and reason for this are still unclear.  For a nocturnal arachnid, glowing doesn’t seem a beneficial trait; it’s the polar opposite of camouflage.  Several hypotheses as to the evolutionary advantage of glowing have been proposed; perhaps insect prey is attracted to it as many are with lamps, or it may be a non-beneficial but non-detrimental result of the chemical construct of the hyaline layer (a side-effect, in essence).

Yet none of these hypothesize are entirely convincing; research shows insects intentionally avoid the fluorescence of scorpions, and being that glowing could be detrimental for survival, it’s unlikely it evolved without being more beneficial than detrimental.  The evidence for this trait being undesirable from a camouflage perspective has been experimentally demonstrated when scientists in a 2010 study found that scorpions that glow more tend to hide more, while those that glow less (as a result of overexposure to UV light, as the UV degrades the responsible chemicals) are more likely to stray from the shelter area.   The scorpion appears programmed to hide when it’s most visibly glowing, indicating the fluorescence does attract predators.

More recent research suggests that because scorpions can sense UV light through their cuticle, they thereby use this ability for sensory purposes; with poor vision, this capability allows the scorpion to respond to light changes with minimal visual aid. The scorpions, unable to see UV light, detect it based on the extent of their fluorescence.  More green glowing means there’s more UV light and thus the scorpion is more visible to predators. Although largely incapable of detecting UV light, scorpions can see the green-blue light, of the type they admit, very well. Like a carbon monoxide detector can detect invisible but deadly carbon monoxide in the air, the scorpion’s exoskeleton can detect UV light that the scorpion struggles to see and relay it to the animal, allowing it to respond appropriately.

Entosense provides Manchurian scorpions along with black lights to allow customers to see first hand the fluorescent abilities that make scorpions so fascinating.

Edible Scorpions, Scorpions you can eat