Posted at 08:34h in Insects and Humans by Sam Broadbent
0 Likes 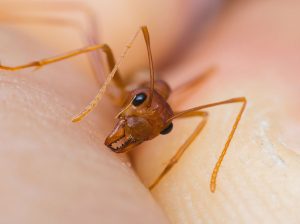 As pest control, weaver ants are brutally efficient. Pests, be it herbivorous insects, birds or mammals are the sworn enemies of weaver ants who see them as a threat to their host plants. As such, local farmers use this fact to their advantage by introducing weaver ant colonies to fruit trees (mango tree being most common). Farmers can inexpensively apply an environmentally-friendly insecticide of sorts.

Weaver ant queens can be collected during their nuptial flights when newborn queens leave their birth colony to mate, and found their own colonies during a certain time of the year. In fact, numerous studies have demonstrated weaver ants to be roughly as effective as chemical pesticides in crop protection. Weaver ants do not harm the crops they inhabit.

As a food source, weaver ants are farmed. Their pupae is a delicacy in several Southeastern countries including Thailand, Indonesia and some areas of China. They are also occasionally available in India. Queen pupae, which are not commonly used for silk by colonies and whose displacement minimally impacts the colony, are primarily collected and as such colonies can be both farmed and used as a pest controlling agent.

Weaver ant pupae are so highly regarded in areas such as Thailand, their asking price exceeds that of a steak of the same weight, as high as double the price in some areas. The ants are one of the few non-meat protein sources in these areas. In addition to protein, weaver ants are high in fatty acids, which are hugely beneficial to the proper functioning of the immune system and aid in maintaining healthy skin.

Harvesting the ants is not difficult; farmers use a stick (typically bamboo) with a bag tied to it to poke a hole in the nest and shake it. The bamboo flower is placed in the bag to prevent ants from escaping, as flower negates their sticky feet. Pupae will fall into the collection bag, as will a large number of adults. The bag is emptied into a container, and a stick is placed on it to allow the adults to climb out. Shaking or whacking the stick will knock off the adults. Any remaining are picked out by a gloved hand. The ants in the colony will repair the nest or create a new nest and continue about their duties after the danger has subsided.

Several dishes make use of weaver ants. Weaver ants and/or pupae can be added to stir-fry recipes, adding more texture than taste. They are a staple of several local Thai dishes, including Gaeng noh mai sai kai mot dhaeng, a soup containing ant pupae, bamboo shoots, mushrooms, among other ingredients, and Jam kai mot dhaeng, an ant pupae salad with a predominantly onion flavor (due to added scallions).