Posted at 08:14h in About Insects, Featured, Insects and Humans by entoblog
0 Likes 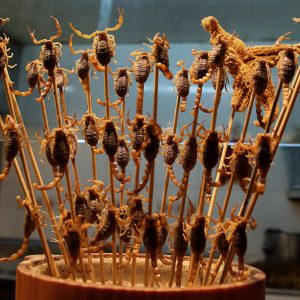 Although in the west the thought of consuming a hard-shelled, venomous and sinister looking arachnid is regarded with apparent dismay, in many Asian countries Manchurian scorpions and their kin are readily consumed as a delicacy.  It’s not inherently preposterous to favor the consumption of such an animal; here in Maine, after all, lobster, a massive marine crustacean which feeds primarily of dead and rotting fish, is a delicacy costing an upwards of $25 dollars per pound.  In retrospect scorpion isn’t all that bad, is it?

The presence of venom in scorpions still deters some.  This concern is well meant, but is born in ignorance; venom is composed of neurotoxic proteins.  When cooked or dried, the proteins dissociate, and the venom quickly becomes inert. It then evaporates, leaving little trace of its existence.  This is to disregard the fact that venom is only effective when injected into the bloodstream, and thus could, in theory, be swallowed without worry (not that that is recommended).  To reiterate; no venom is present in scorpions prepared for human consumption. The thought of eating something which once contained venom should not raise concern; in the west meat is cooked for a reason, and if eating a scorpion tail worries some, the thought of eating meat crawling with millions of potentially deadly infectious bacteria should be one’s foremost concern.  That rare hamburger is far more dangerous to the average consumer than any commonly consumed arthropod.

The taste of Manchurian scorpions is unique among arthropods.  Raw, it is similar to shrimp although the texture is crunchier.  The taste too depends in part on their preparation. When a flammable alcohol is applied, and the scorpion roasted, it takes on a distinctly nutty, barbecue taste which few can resist.  The scorpion can be served on a skewer over a martini, cocktail or similar beverage, much to the delight of the consumer. In our recent joint effort with BaoBao Dumpling House in Portland, Maine, Manchurian scorpions were coated in grenadine, lit on fire, and served on a skewer in a scorpion cocktail.  The scorpions can also be grilled and skewered on a shish kabob, sautéed and mixed in stir-fry, fried and battered, and even coated in chocolate.

Edible Scorpions, Scorpions you can eat