05 Jul ABOUT THE MAGUEY WORM

Posted at 10:22h in Featured by entoblog
0 Likes 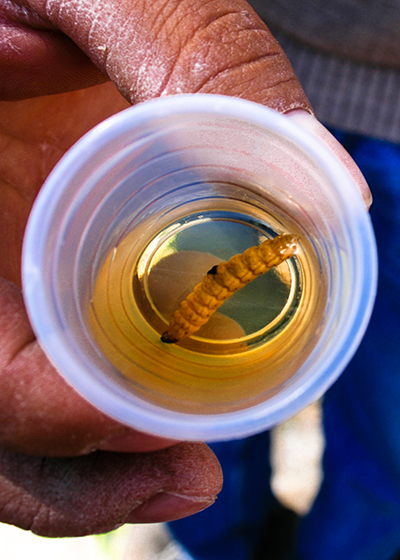 The maguey worm’s most highly valued characteristics today is what it harbors within its roots: A large, jelly-like mass crawling with small red worms. The red maguey worm, referred to in Mexico as gusano rojos, gucano de maguey or chinicuiles/tecoles, is the larval form of Comadia redtenbacheri, a moth common to southern North America. Ancient indigenous populations first began consuming the worm and Spaniard colonists later took up the practice.

The worms are now considered a delicacy in areas of Mexico, where they are either eaten alive or roasted and served in a bowl accompanied by a tortilla, guacamole or a similar sauce and lime. The worm’s flesh is soft and the flavor truly uniquely sweet, unrelatable to any commonly consumed food. Today red maguey worms are served in numerous restaurants across Mexico, Central America, and soon, the United States.