19 Jul About The Weaver Ant

Posted at 08:15h in About Insects by Sam Broadbent
1 Like 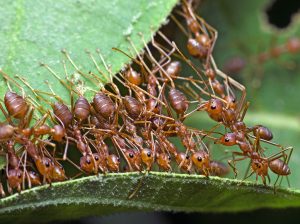 The term weaver ant refers to a diverse genus (Oecophylla) of tropical arboreal (tree-dwelling) ants which inhabit Southeast Asia, Australia and the Philippines. Weaver ants are usually green, yellow or red-brown and uniquely set up residence high in the canopy of tropical forests. As far as ants go, weaver ants are highly regarded for their unique behaviors, clever architectural methods, symbiotic relationship with host plants and for their relationship with humans.

Weaver ants get their name for their nest building behavior, which involves weaving plant matter, particularly leaves, still attached to the plant into structures using silk excreted from the ant’s larvae. The ants do so by pulling leaves together and attaching them with silk.The result is a ball or elliptical structure composed of plant matter and silk which houses the colony’s queen and larvae.

Where at one time ant larvae pupate in cocoons formed from this silk, weaver ants have evolved to utilize it primarily for construction of nests. This has proven hugely beneficial for the genus. The larvae’s silk is not dissimilar from that of silk used to form structures by other arthropods, such as that utilized by spiders in web construction or by silkworms in metamorphosis. It is strong and durable which helps to deter attacks from insectivorous predators. In order to construct nests, ants must hold the larvae in their jaws and, like a portable web dispenser, squeeze the larvae to excrete web onto the surfaces where it is needed.

By using living vegetation, the ants can generally avoid drying out and becoming brittle, as would nests composed of detached leaves. These nests are also water resistant, an important feature for ants inhabiting the treetops in tropical forests prone to seasonal monsoons. However, despite their durability, new nests are seemingly continually produced in response to occasional damage and the need for room to accompany a growing colony. Large nests can exceed the size of a basketball.

In order to construct nests out of canopy leaves, ants must work in unison to accomplish what no single ant could. The ants bridge gaps between leaves by biting one another’s petioles (the region between the ant’s second and third body segment), and forming ant chains, with the ants on either end making use of their long legs, sticky feet and strong jaws to grasp to the surface of the desired leaves. In this way, they can pull leaves seemingly far out of their reach together to be weaved into the nest.

Advanced communal behavior is nothing new in the ant world, as demonstrated by the increasing numbers of YouTube videos of fire ants constructing rafts of their own bodies to survive seasonal flooding. However, weaver ants are unique in their ability to regularly create large housing structures through the combined strength of connected colony members. Through a communal effort, even the largest and most daunting nest can be constructed in less than a day.

Even to disregard the amazing constructional feats of the weaver ant genus, one can be impressed by another behavior of ants; the ability to farm. Humans began farming livestock around 10,000 years ago. Ants have likely done so since the age of the dinosaurs. Ants have also perfected this behavior; an average weaver ant colony maintains roughly half a million scale insects. That’s more heads of livestock than even the most ambitious human farmer could dream of sustaining. Scale insects, or more commonly scale bugs, are a diverse group of insects farmed by a number of ant species for the honeydew they secret. Weaver ants protect these small insects to milk their honeydew, which feeds the ants and their larvae.