02 Aug About the Manchurian Scorpion

Posted at 07:52h in Uncategorized by Sam Broadbent
1 Like 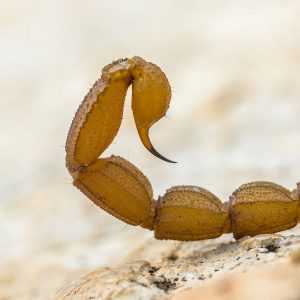 The Manchurian scorpion, Mesobuthus martensii, also known as the Chinese or Golden Chinese scorpion, is a small golden-yellow scorpion native to northern and eastern Asia.

Open sandy habitats are its preferred home, although it can also be found in dry woodlands.  For a small, shy arachnid it has substantially contributed to indigenous culture, being both consumed by native cultures and used in ancient and modern medicine.

Originally named Buthus martensii, it was later assigned to the new genus Mesobuthus.  Nevertheless, most scientific publications still identify it as Buthus martensii or more commonly Buthus martensii Karsch (Bm K) in reference to Ferdinand Karsch, the entomologist who originally described the species.

Like most scorpions, the Manchurian scorpion harbors a toxin in its telson (stinger bulb) which aids in defense and prey capture.  The venom is painful but comparatively mild to humans. Its venom has in fact become a large area of study in pharmaceuticals for its medicinal properties.  In traditional Chinese medicine, the Manchurian scorpion’s venom has been used for in excess of 2,000 years to treat a host of neural conditions, primarily as a means of pain relief.  Neurotoxic proteins in the venom may have altered the effects of neurological conditions, thus the belief by ancient Chinese societies of its ability to treat conditions such as epilepsy and paralysis.  In addition, peptides in the venom have been found to affect cellular ion channels. Although ancient cultures failed to understand why it could be effective, they understood that it was, for reasons unknown, a means of treatment.

Like most arachnid venom, the venom of the Manchurian scorpion is composed primarily of proteins that are neurotoxic in nature which impair neuronal activity and restriction channels.  By purifying the venom scientists can disassociate specific peptides which affect ion channels and identify their structure, function, and effects for pharmaceutical use. As a channel inhibitor, these peptides can prevent the flow of sodium or potassium between the intracellular and extracellular fluids.  In pharmaceutical studies, these inhibitors have been used to decrease hyperactivity or malfunction in areas of the cell. Channel inhibitors can also be used for therapeutic treatment of neural conditions. Purification of these peptides could result in the synthesis of a component eventually used in pharmaceutical treatments for neurological conditions, such as Alzheimer’s disease, and diseases rooted in cellular dysfunction, such as Cystic Fibrosis.