Posted at 08:50h in About Insects by Sam Broadbent
6 Likes 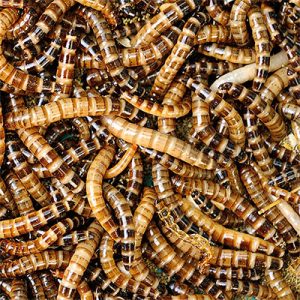 Mealworms: a stable feed for reptiles, amphibians, birds and fish; a possible key to reducing the plastic choking our ecosystems; a healthy, environmentally friendly, and easy to raise source of protein which may aid in reducing world-hunger.

Sounds good, but what is a mealworm?

For a start they’re not actually worms; mealworms are actually the larvae of the darkling beetle species Tenebrio molitor, and, like many beetle larvae, mealworms naturally preside in the soil and under rotten logs. More interesting, however, is the fact that the region of origin of mealworms is unclear; spread both unintentionally through wheat, oatmeal, corn, and rice, where the larvae will preside given the opportunity, and as bird, fish and reptile feed, mealworms now have numerous habitats across various continents.  Although thought to have originated from Southern Europe and Northern Africa, (confusion has lead some to believe them to be native to North America, but this is not so), mealworms have since spread to North America, Asia, and possibly Australia.

Mealworms are well known in warmer climates in agricultural areas for their unwelcome presence in crop yield. They earn their name for most commonly found feeding on meal and similar dry goods.

They’re also popular for their ease of care as reptile and chicken feed, and can be found in most pet stores as a result. Often times people are interested to learn the insects they’ve been raising for their chickens or pet gecko may actually be a healthy addition to their diet as well!

So mealworms are prevalent as pests, animal food, and live in the backyard of a good percentage of the world’s population, but why entertain them as a food source for humans?

There are a number of reasons to eat mealworms. For one, they’re an exceedingly healthy food source. As far as minerals are concerned, mealworms contain more iron and zinc per pound than any red or white meat, and are high in most minerals necessary for humans.

Beyond vitamins and minerals, mealworms have protein levels comparable to that of beef, they naturally contain essential amino acid levels similar to fortified protein powders, and compare well to meats in their measure of fatty acids. While Omega-3 levels for mealworms are not dissimilar to those levels in beef, the Omega-6 of mealworms is over 9 times that of beef. They also contain prebiotic fiber, unlike other meats.

When considering environmental impact, eating insects is arguably the best way to reduce one’s carbon footprint. Mealworms produce negligible amounts of methane, in contrast with conventional livestock, and less than 20 percent of the CO2.

Mealworms need less than 1% of the water per pound that cattle, they only require around 5% of the feed per pound, and, as one can imagine, a fraction of the land required for any livestock.

However, mealworms may aid the environment not only by being an environmentally-friendly food source; a study published in 2015 by Stanford and Chinese researchers found mealworms are capable of consuming polystyrene plastic (styrofoam, for example). They further found no difference between mealworms fed on polystyrene and mealworms provided a typical mealworm diet. The scientists deduced that the microbial environment inside the worm’s gut allowed for the breakdown of these plastics into biodegradable frass (mealworm waste). This research may prompt further study into the gut microbes that aid in this digestion process. Mealworms, or their gut bacteria, could be studies as a means of degrading polystyrene, one of the most pervasive plastics plaguing our environment.